Has Investment Property had its day?

House price increases have without doubt slowed in recent months, giving rise to speculation in the media that a property down turn is around the corner. The Governor of the Bank of England has come out and stated that the outlook for the housing market is “extremely uncertain”, with modest falls expected. So does this mean that property as an investment has had its day?

Absolutely not! Let’s take a look at the facts.

Many economists use the house price to income ratio (HPI), as evidence of overvaluation, and a good indicator of house price realignment. We question this assumption because there are many other demographic and financial forces which are not taken into account in this ratio.

For instance, the HPI is based on single adult earnings when in fact most mortgages are based on two incomes. Accrued wealth is not taken into account yet the National lottery alone, has created 3,700 millionaires in the last 10 years. Also, the UK now attracts significant overseas buyers, further supporting increased house price levels.

Another major influence on affordability is interest rates. Today, base rates are just one third of their 1990 levels, so we begin to see that housing is currently more affordable than the HPI ratio would suggest. Throw into the equation the much changed demographics of the country and an all together different picture of house price stability starts to emerge.

Immigration into Britain currently stands at 200,000 people per year and is rising. Life expectancy is increasing. Divorce is also on the increase resulting in a higher number of single person households and single parent families. The number of households in Britain has been growing by 155,000 each year, and this figure is set to increase in the coming years, yet the number of houses that have actually been completed averages just 125,000 per year. This is the lowest rate than at any time since the Second World War. 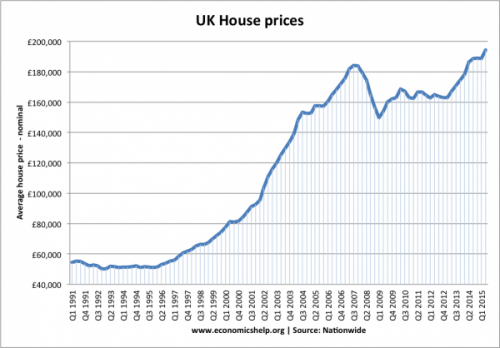